You grew up in the suburbs, your family drove you places and the only bus you ever rode was a school bus. But now you’re at Rutgers, you don’t have a car and no one will drive you to the Dick’s Sporting Goods, damnit!!
Dick’s is on the 815 and 818. Also, I get it. And I’m here to help! Here are the bus basics that transit authorities expect you to already know, even if you don’t. Buckle up, or actually, don’t. There are no seat belts on the bus.


Not Your Rutgers Bus
You’d be hard pressed to find a public bus that operates like the Rutgers ones, going around an infinite loop, stopping for seemingly random times. Instead, most travel along linear routes, reaching each point at a planned time shown in a public schedule. But obviously, these times are approximate. When buses are delayed (thanks to my sworn enemy, the cars), they usually only catch up by a few minutes. But if a bus is ahead of schedule, there are certain stops (like the train station) that they’ll wait at to get back on time. However, at most stops, there’s a chance that the bus will arrive and leave a couple minutes early. So you should be at the stop a couple minutes early too. I recommend 4 minutes. 6 to be safe.


Don’t trust Google Maps… ever.
Transit authorities usually provide digital schedules (called a GTFS) to apps like Google Maps or the much better app, Transit. (Not sponsored. I promise.) Just plug in your origin, destination and time, and it’ll tell you what to do. No more looking through schedules! At least, that’s how the theory goes.

Instead, most transit authorities are run by a bunch of total [choose insult] who often forget to update information or actively confuse customers by uploading wrong data to third party apps. For instance, digital schedules sometimes have errors. And when there’s a detour or cancellation, the GTFS will almost never be updated accordingly. That’s part of why I made this website, to work around the crippling incompetence inside transit agencies.

I tell you this not to scare you, but prepare you to understand what’s going on when you find conflicting information. If riding Coach USA, Somerset or MCAT, you should ignore Google Maps entirely (These three have shown an ambivalence toward providing accurate data.) and instead use the pdf schedule. Thankfully, NJ Transit’s GTFS data can be trusted, but I’d think twice before using Google Maps, Apple Maps or Moovit to plan trips. These three are slow to update when schedules change. Often days slow. That’s why I always use Transit. It updates almost immediately. However, even Transit can be wrong during temporary service changes. For instance, if there’s a detour, departures will still be shown on the bypassed stops. So look for alerts on the agency’s alert page (linked on the home page). Coach USA and NJ Transit also let you put yourself on notification lists for specific routes, so if anything changes, you’ll be the first to know. And if all else fails, you can call them.

NJ Transit also provides real time GPS tracking to 3rd party apps (incluing Transit). This is a lifesaver, but if it suddenly says your bus isn’t coming, be skeptical. It might be getting confused by a bus coming the other way. You can double check by looking at MyBus in the official NJ Transit app.

So to sum it up, technology is great for planning complex trips, tracking buses in real time and seeing service changes. One could easy think that a flexible digital schedule data is more reliable than a static pdf. But at this point in history, when a digital schedule and a pdf schedule disagree, the pdf is almost always right. So until the boomers running transit agencies retire, all riders will eventually find themselves pouring over a paper schedule. So, how do you read one?


Reading a Schedule
After you open the pdf, get to the timetable with the right day of the week and direction of travel. Each row represents a bus that travels down the route and each column represents a point on the route, called time points. (On many schedules, 8:53 AM is printed as 853 to save space.) For stops in between time points, you just estimate the departure time by looking at the map. Here’s how it works in practice. 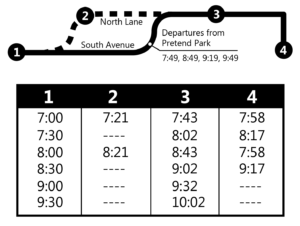 Let’s say you’re waiting at Pretend Park and you want to travel to 3. From looking at the map, you can tell that buses traveling via North Lane will not stop at Pretend Park, on South Avenue. Instead, the bus you want will show dashes in the 2 column. Now look at the map again. You can see that Pretend Park is around 2/3 of the way between 1 and 3, which are 32 minutes apart for buses traveling on South Ave. So the bus should come around 21 minutes after leaving 1. (It’s actually 19 minutes, but it’s okay because you’re showing up five minutes early to be safe.) So now you know, to get you from Pretend Park to 3, you can take a bus at 7:49, 8:49, 9:19 or 9:49. But let’s say you instead want to get to 4. Then you can only take the buses leaving at 7:49 and 8:49, since after that, service to 4 stops running, with runs ending at 3 instead.

Adventure Tip: Before you set out on a bus adventure, check when service stops running so you don’t get stranded. This is especially important on weekends, when service is more sparse.


Gimme Shelter
Some stops have a whole shelter. Some are just a bench. Some are just a sign in the dirt. And some are unmarked, literally nothing. But they are still real, designated stops shown on Google Maps, with their own official name and ID number. On NJT, drivers are technically supposed to only stop at these designated stops (unless its a rural route). But the four non-NJ Transit routes in New Brunswick are flag-down routes. Meaning that you can wave to the driver, and they’ll stop as long as it’s safe. Bus drivers always want to avoid stopping right after an intersection, and prefer stopping right before or mid-block.


Getting On and Off
This isn’t like the Rutgers bus. When you get to your stop, you have to be visible and clearly waiting for the bus, or it’ll blow right past. If your stop is unmarked or a flag-down, give a little wave. On the flip side, if it’s not your bus, step back or wave the driver on so they know you aren’t waiting for them. When you want to get off, reach up and pull that yellow cord (or press a yellow strip) along the window until you hear the bell sound. Timing is everything. The sweet spot is about 500 ft ahead of your stop. If you’re nervous, you can err on the side of early and tell the driver “Sorry, one more.” if you pulled it too soon.


Ticket Tips
Each transit authority in New Brunswick has a different fare payment system. I’ll guide you through all the little quirks in the route pages, but for now, you just need to understand zones and transfers. MCAT and Somerset Transit have a flat fare, where you pay the same no matter how far you’re going. Coach USA and NJ Transit run longer routes, so they use what’s called a zone system, where you pay a different fare based on how many zones you’re traveling through. In other words, if you cross zero zone boundaries, that’s a 1 zone ticket. If you cross one zone boundary, that’s a 2 zone ticket, etc. Zone boundaries can be a road, a train crossing or even a creek. I’ll make sure to mark them on the line map at the top of each route page.

A common point of confusion is the labels on the tickets (digital or physical). To help riders know they have the right ticket, Coach USA will mark their tickets with an origin and destination, and NJ Transit will mark their tickets with the route you bought the ticket for. But you can still use the ticket for different trips or other routes, as long as the fare type is the same. What the driver is looking for is the number of zones on the ticket and whether the ticket is “interstate” or “intrastate”/”local”. 2 zones on the 811 is the same as 2 zones on the 810. If it sounds complicated, just remember that if you’re short one zone, especially if it’s a short trip that just happens to cross a boundary, drivers will never give you a hard time.

Now we get to transfers, getting off one bus and getting on another as part of the same journey. On Coach USA and MCAT, this means paying for a separate trip. But on Somerset Transit and NJT, you can get a transfer fare for $0.50 and $0.75 respectively. That means when you get on your first bus, you pay your fare/use your ticket and then ask the driver for a transfer. Hand them the transfer fare in exact change, and they’ll give you a physical transfer ticket that you can use to board your next bus. Even on NJT, where they have digital tickets, the only way to get a transfer is on the first bus, in exact change. So remember to carry quarters! And if you forget, you can always just pay another fare.


Closing Remarks
I believe transit literacy is a critical life skill. But unfortunately, in the US, people who don’t learn how to ride at a young age often end up transit virgins for life, given the steep learning curve on most transit systems. That’s truly a shame, because in my opinion, transit is the best way to travel distances over 2 miles. Gas and parking are resource intensive and pricey, a broken windshield wiper will cost you literally hundreds of fares, and riding a bus is at least 8 times safer than riding in a car. It’s also for the vibe. I love traveling out in the world with people, instead of locked in a box alone. And even though it doesn’t get me there as fast as driving, I’ve gotten a lot of studying done on board.

So get out there and start riding. I know you can do it! And if you get confused, send me an email at alex@newbrunswickbuses.com.